George, or to give him his full title, George Henry, was born in April 2015 and was twelve weeks old when purchased by BORG volunteer, Simon Cox, from a licensed breeder based in Wisbech, Cambridgeshire. George was named after the sons of Simon’s colleague and AVDC Biodiversity Officer Paul Holton, another BORG volunteer.
George lives in a specially built aviary in Simon’s back garden, where he has a comfortable roosting box, a series of wooden perches and, most importantly, room to fly and stretch his wings. He is fed twice a day with a combination of day-old chicks (his favourite) and mice, all from a reliable commercial producer. Between six and ten hours after feeding he produces one or two pellets. A pellet is a regurgitated mass of indigestible hair, skin and bone; pellets left by wild owls can be used to determine their diet (Pellet Dissection).

A Little About George

George is 290 mm in height, weighs 380g and has a wing span of 680 mm. He went through his first moult during July and August of 2016, during which time only a small proportion of his feathers were lost and replaced. Moulting, usually in a set sequence, is a process he will go through every year of his adult life.

In the early months of ownership Simon and George, with the help of other falconers and bird handlers, worked at getting to know one another. It was also during this period that George became accustomed to travelling in his new box. 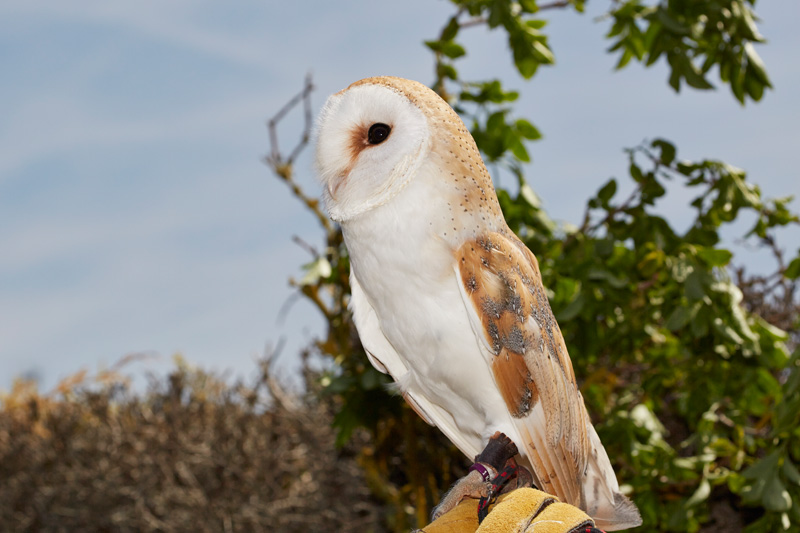 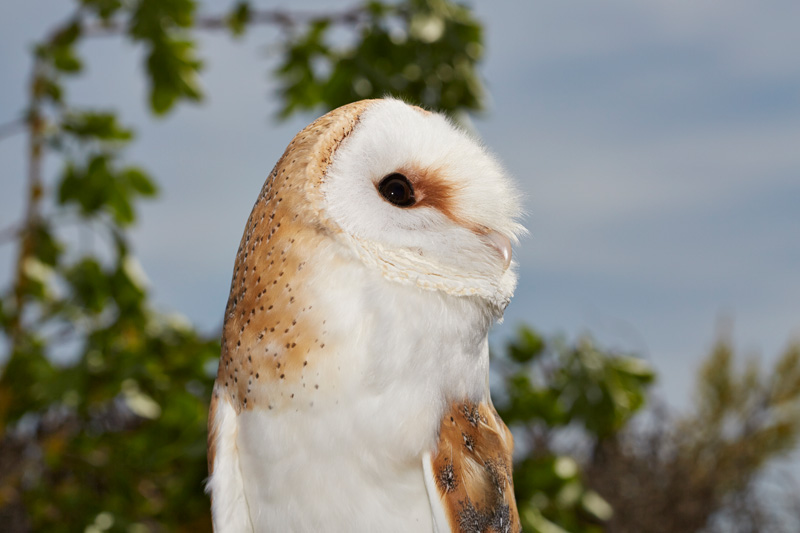 As a result of their efforts George has become a generally well-behaved owl, although like all of us he does have his “off” days! Generally he has a friendly and gentle disposition and is now becoming an integral part of BORG’s educational talks and visits – and an ideal ambassador.

When in public George is kept in his specially-built travel case, or on Simon’s glove, but it is hoped that in the forthcoming months he will be trained to sit on a bow perch, or similar – he will NOT, at any time, be free flying. However, in all situations Simon’s supervision and approval is essential for any safe, close contact with George, especially the stroking of his feathers as too much stroking can strip the feathers of their natural oils.

In compliance with Schedule 3 (part 1) of the Wildlife and Countryside Act 1981, George wears a continuous metal band known as a closed ring. In common with all captive barn owls, he holds a Specimen Specific Certificate (known as an Article 10 Certificate), issued by DEFRA. This complies with European Union Council Regulation 338/97, which applies the Convention on International Trade in Endangered Species of Wild Fauna and Flora (CITES) in European law. This certificate is not owner-specific, but relates to an individual bird and is passed on from keeper to keeper. Together, these documents allow for the keeping, advertising for sale and actual sale of certain species, including barn owls, if ringed and bred in captivity. The commercial uses for which an Article 10 Certificate is required include the sale of birds and other activities involving commercial gain, such as the display of birds in public places and visitor centres.